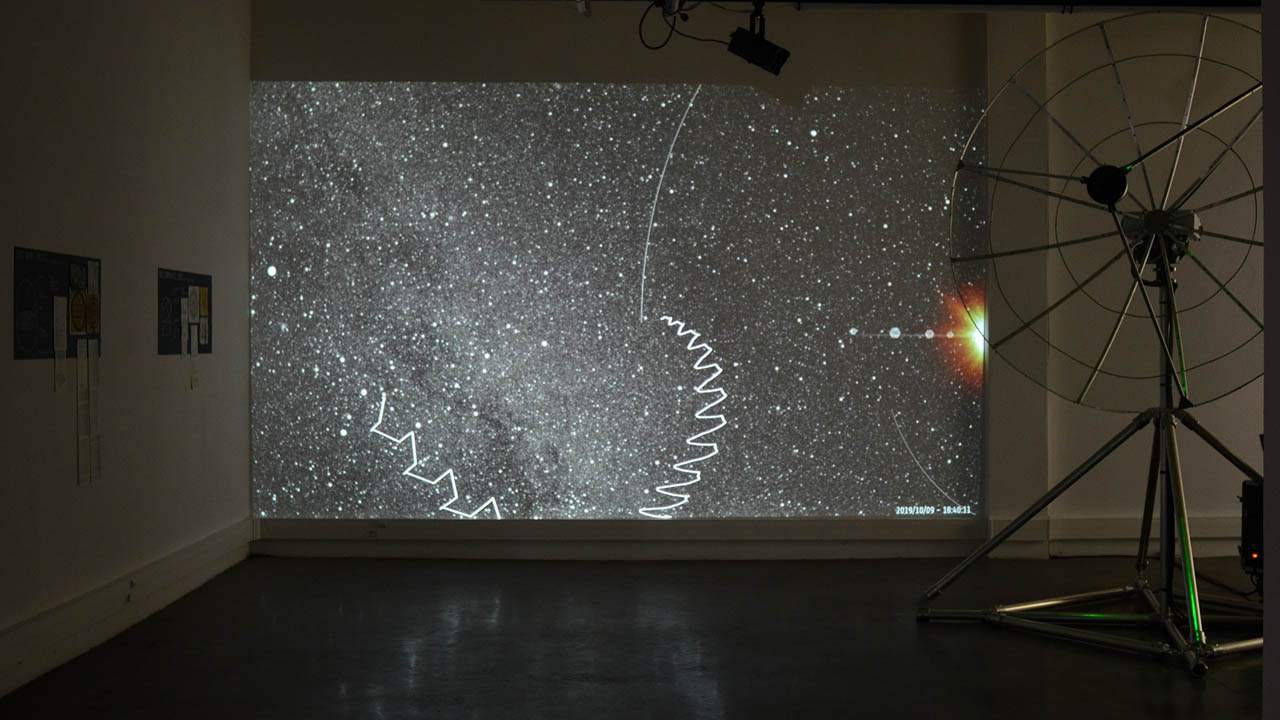 Axis Mvndi is a device that sends radio waves in space in order to draw shapes at a cosmic scale. By playing on the movement of a dish antenna, ancient cosmological models are materialized into space and become autonomous shapes in infinite movement. Axis Mvndi proposes a theoretical and artistic shift on the use of the electromagnetic spectrum through the broadcasting of waves that will never be received. They are used for their greater specificity: their traveling at the speed of light.

The shapes drawn by Axis Mvndi correspond to representations of the universe imagined during antiquity: Babylonian constellations, seas of the Hindu cosmic egg, Greek burning wheels or Norse Yggdrasil. Using modern techniques to project these figures in space, Axis Mvndi is positioned as a poetic realization of these ancient representations.

The installation is centered around a motorized 2m parabolic dish antenna. This antenna is rotating continuously, broadcasting waves in the desired direction to achieve the drawing of a cosmological form. On a wall, a video projection follows in real time the course of waves. Anthropological and scientific documentation on cosmological representations is displayed on another wall.

The shape of an antenna characterizes the waves it can emit. Here, only one frequency is sent in a very precise direction, which determines the material, the dimensions and the structure of the antenna. The model chosen is a satellite dish, sculptural element of the emission device visible in the exhibition space. The entire control equipment is arranged in a rack at the edge of the antenna. 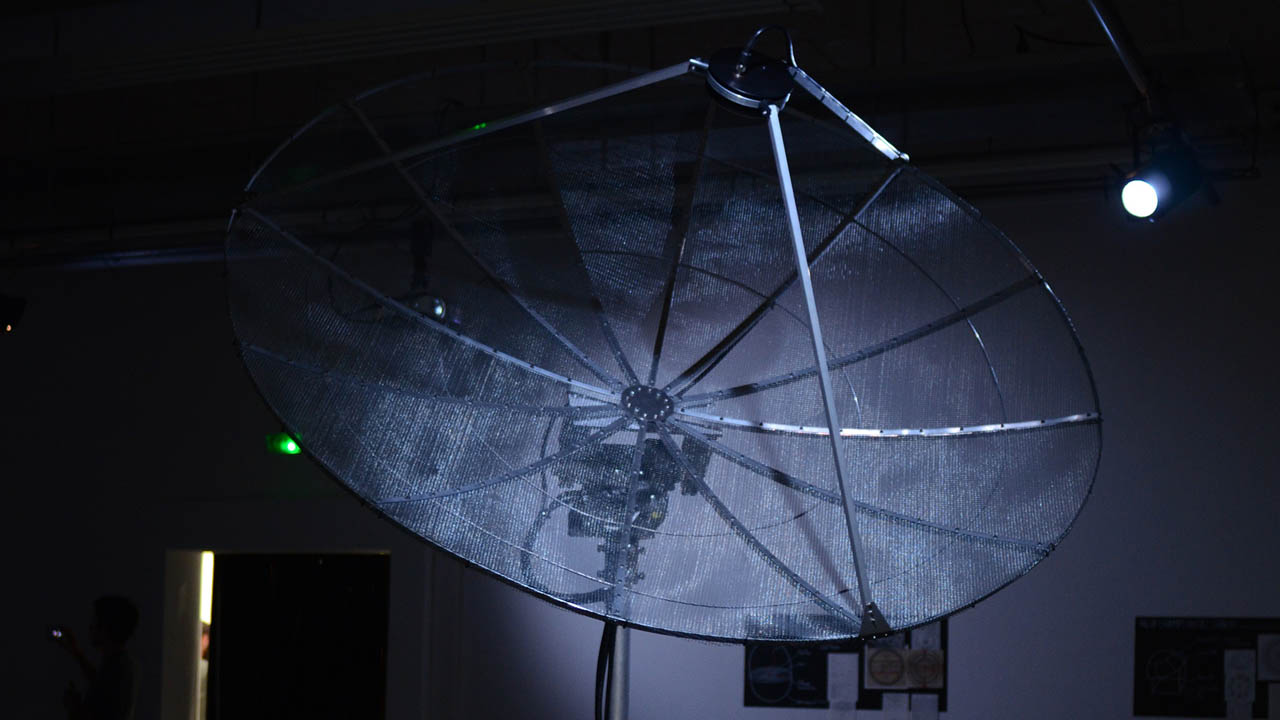 The antenna, mounted on a rotor, is oriented horizontally and vertically according to the shape of the cosmological model executed. The installation plays on the orientation of the antenna and the duration of emission of the wave, depending on the position and the orientation of the emission location on Earth: the movement of the antenna is superimposed on the movement of the earth. This movement is the only apparent action and places the broadcast in a reality perceptible to the visitor.

A cosmological model is broadcasted permanently in the installation. Depending on its complexity, the process lasts between a few minutes and half an hour. At the end of the process, a new model is randomly chosen, the video projection is updated and a new sculpture begins. 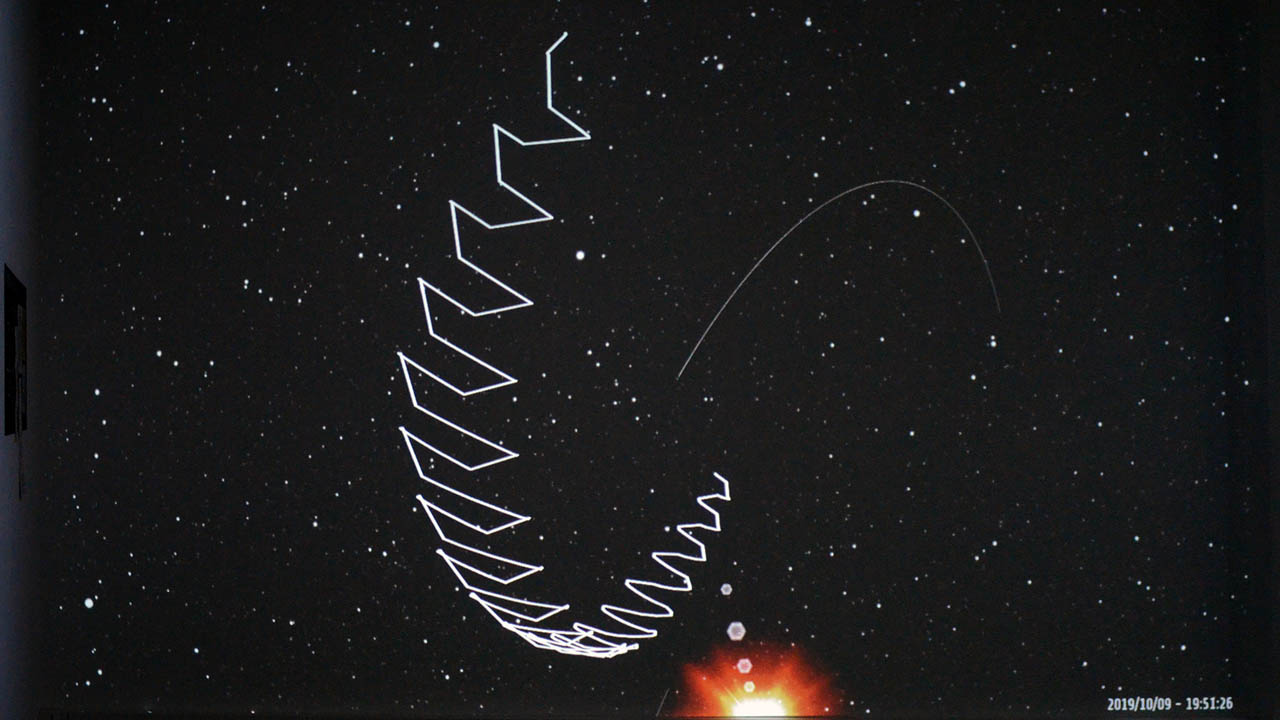 A video projection displays and explains the current process. It allows to visualize the model that Axis Mvndi is reproducing and the path of the waves already emitted to realize it. On the rack, a series of technical information allows to contextualize the emission: estimated duration of the realization, pointing of the antenna, position of the Earth...

Nearby a wall documents the context of emergence and retraces the history of the cosmological models executed by Axis Mvndi: tables containing texts, diagrams and sketches are produced by the artist following the anthropological research carried out. 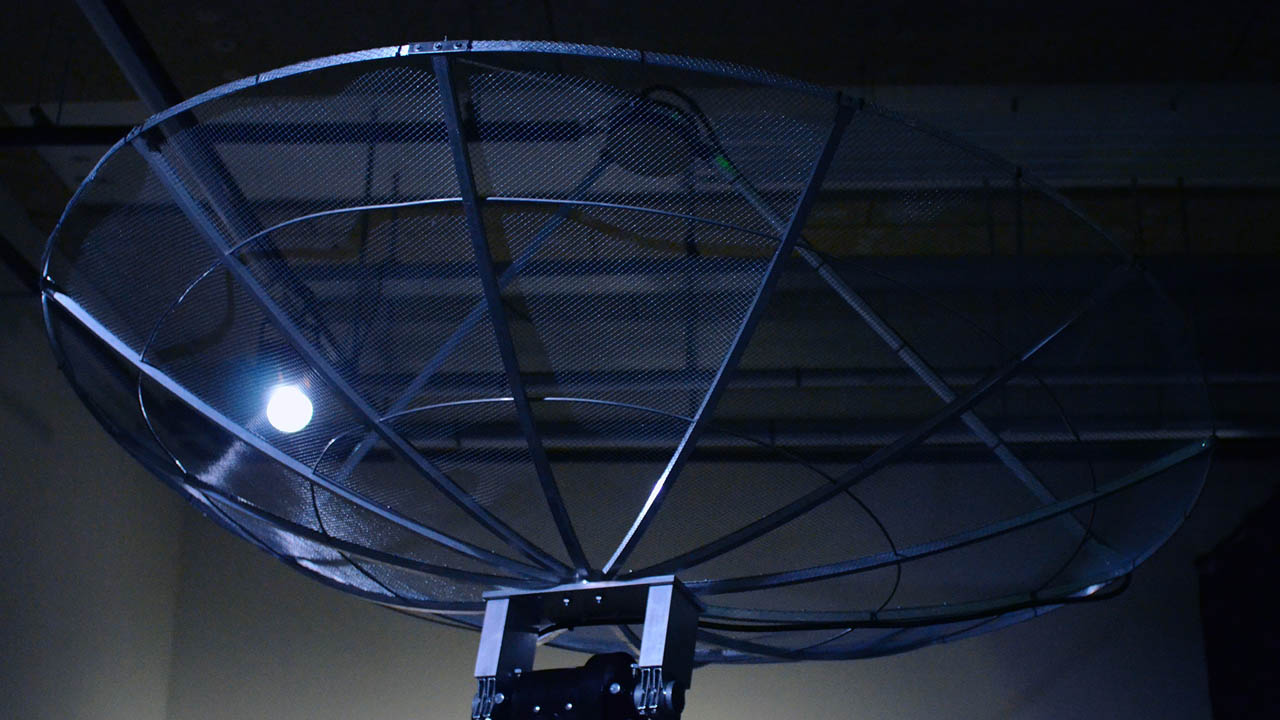 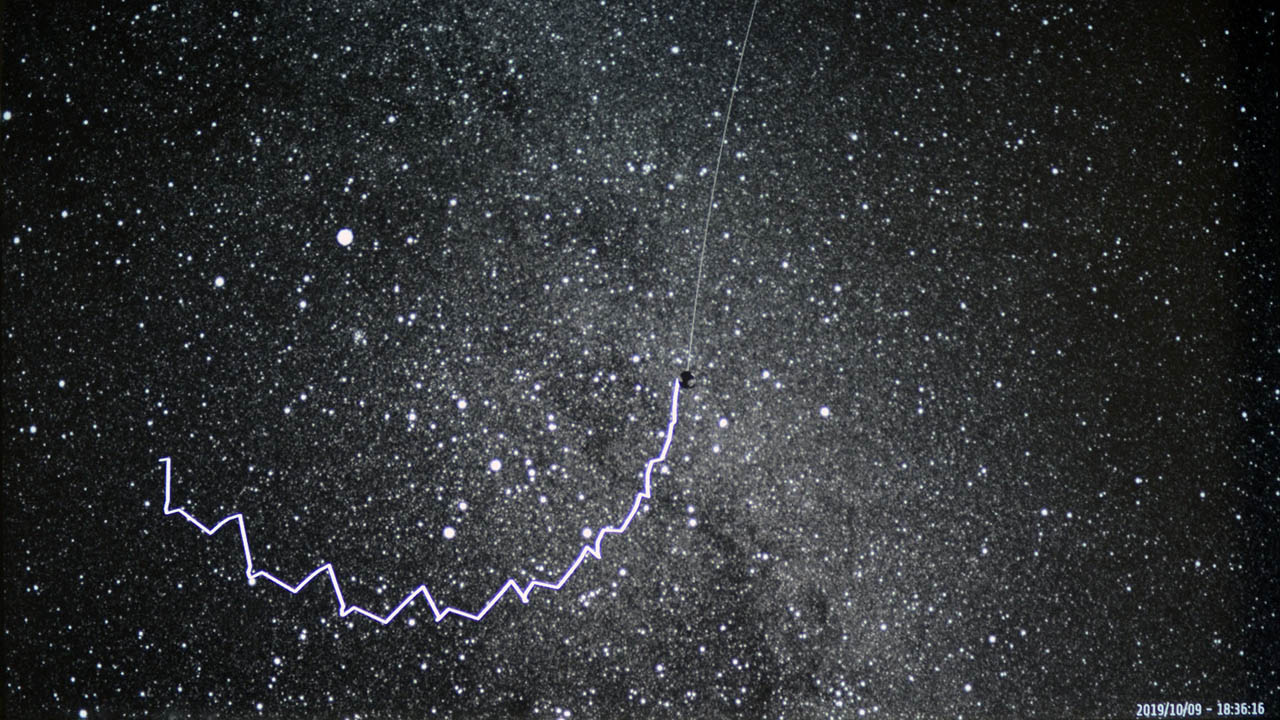 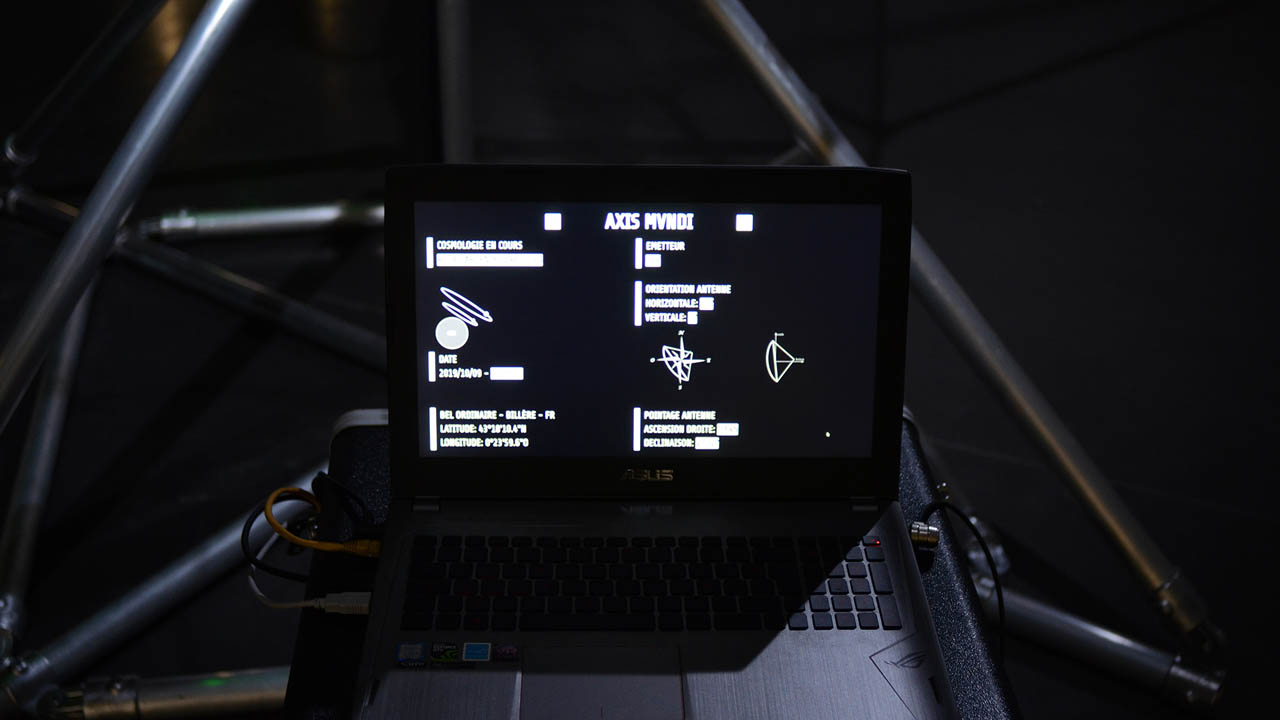 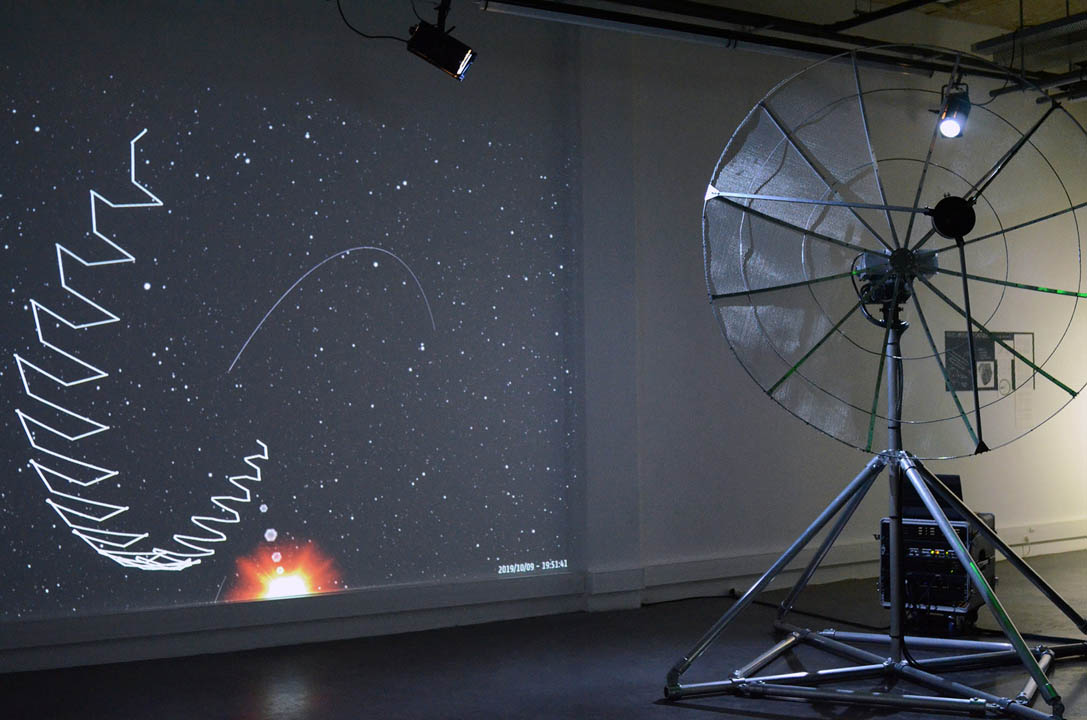 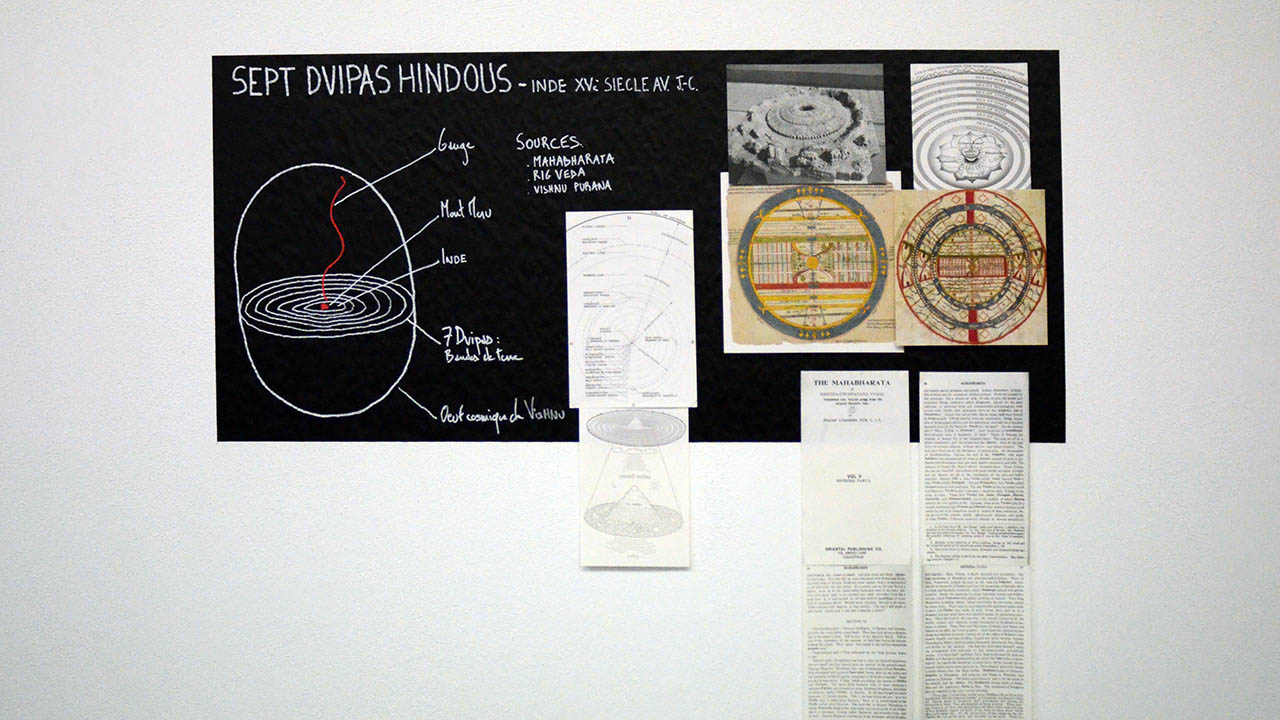 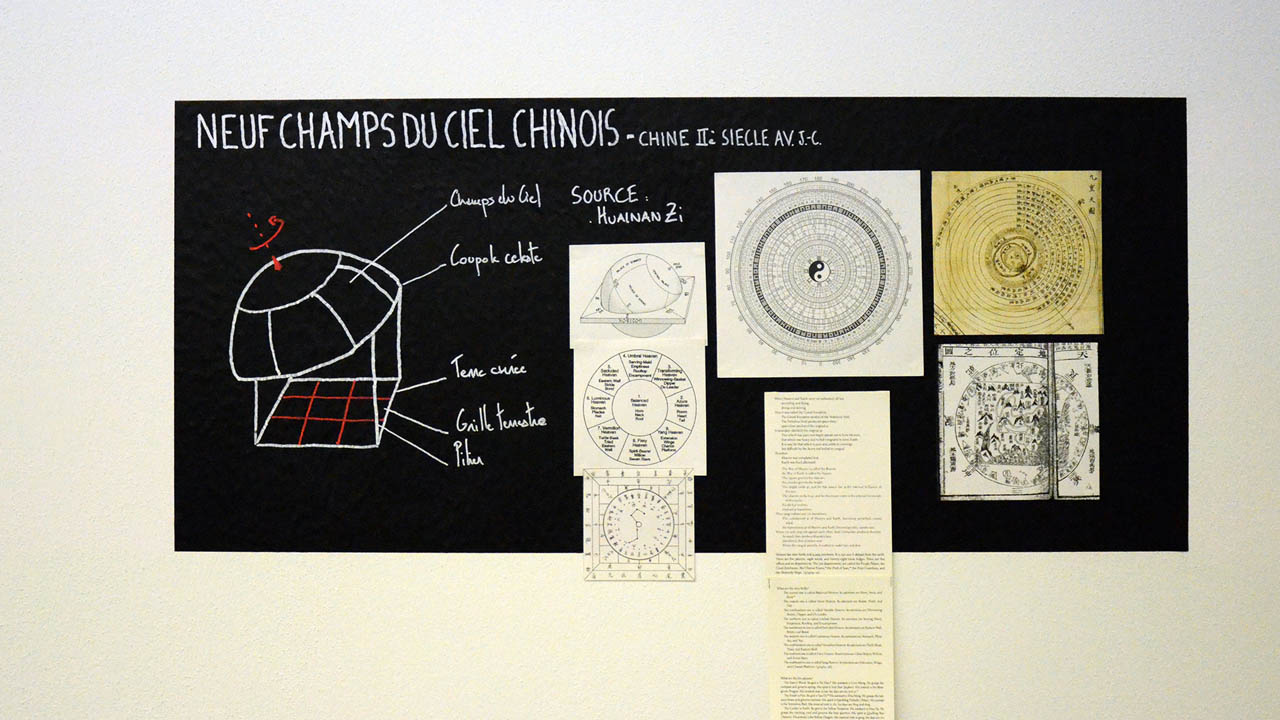 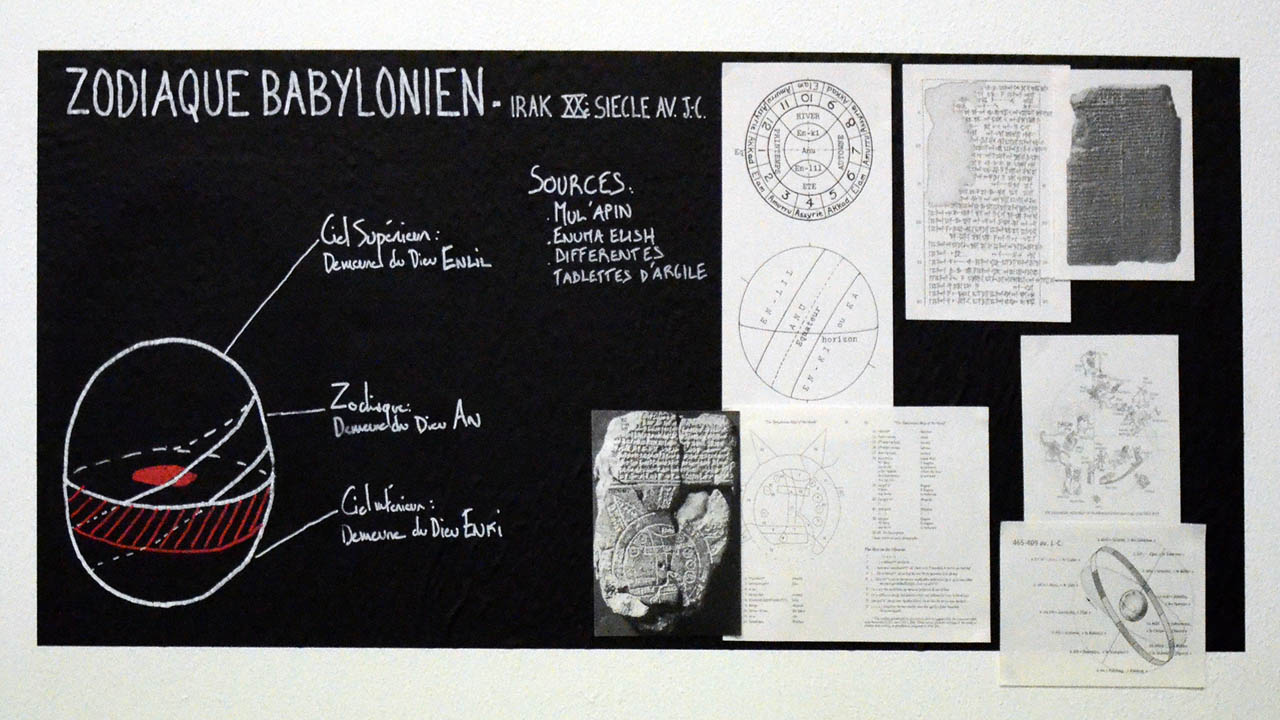 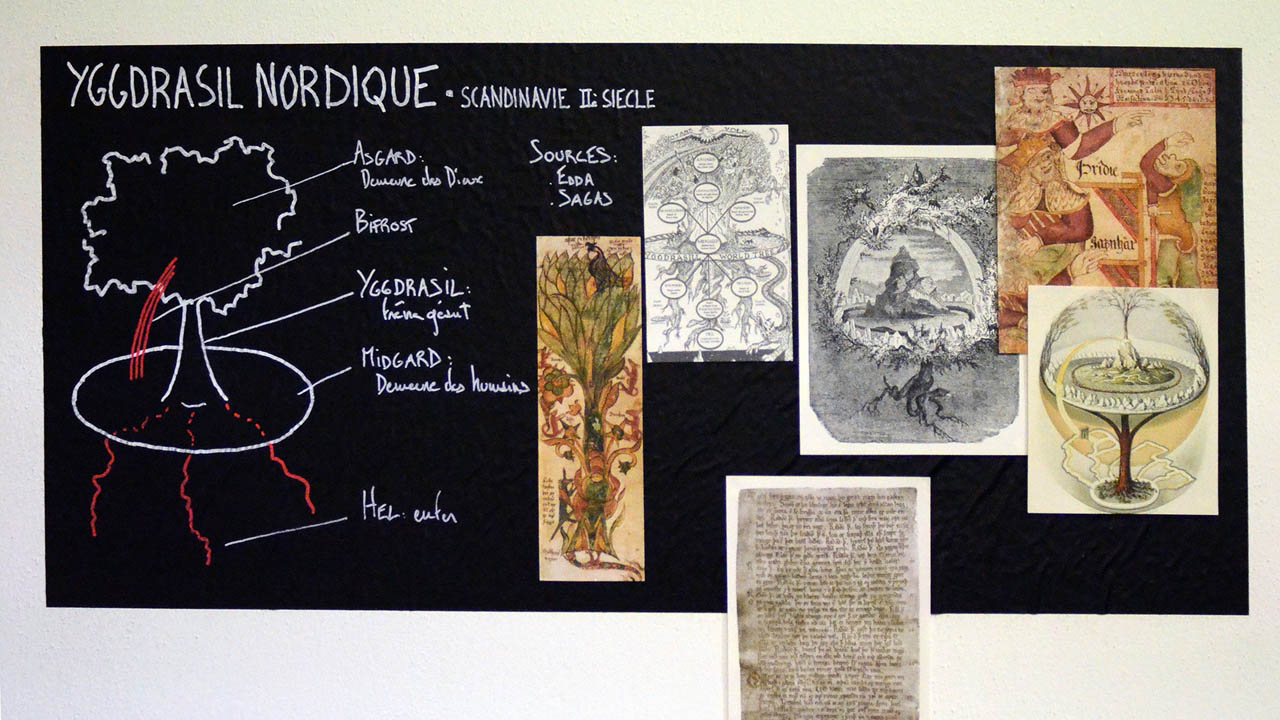 This movie documents the realization - thanks to radio waves - of the antique cosmological model of solar and lunar wheels. By broadcasting precisely orientated waves into space, the old representation of the Universe by Anaximander of Milet is realized around Earth under the shape of a cosmic sculpture made with electrical energy.

The website is a documentation tool but also an important development of Axis Mvndi: it allows to visualize in real time the position of all the waves emitted since the beginning of the project. Each broadcast is inventoried, and the corpus of figures deployed during the various exhibitions, performances and tests is updated with each intervention and can be accessed separately.

The simulation allows to visualize the progression in the deep space of each form as time goes by. Shapes increase scales while propagating in space. The different scales are represented on the site in order to be aware of the speed and distances traveled: Moon, Sun and nearby planets for a wave emitted a few minutes ago, asteroid belt, distant planets and Kuiper belt when emitted a few hours ago, the hypothetical cloud of Oort after a few months; and neighboring stars after a few years. The simulation is scientifically accurate, it is custom-made in Javascript and Python by using scientific databases.